The NIHL Championship Series is delighted to announce that we are taking the show to Planet Ice Milton Keynes for the Britton Finals Weekend over April 23 and 24, 2022.

Clubs in NIHL South 1 will come through a quarter final playoff round on April 16/17, with the four winners making their way to MK for the trophy showdown.  Two semi finals will be held on Saturday April 23, with the Grand Final on Sunday April 24.

NIHL Events manager Steve Merry said: “The rink at Milton Keynes is a great venue to watch hockey and will be a fitting host for our Britton Finals Weekend.

“We are looking forward to welcoming supporters from all clubs in the Britton division as well as our four finalists to celebrate the league’s return to action this, and finishing with a bang!” 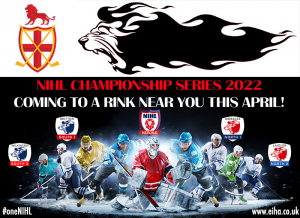